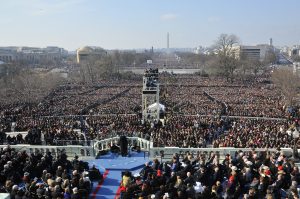 I wrote this poem in late 2008 after Barack Obama was elected president but before his inauguration. The title is from his campaign chant that he got from a woman who supported him: “Fired up! Ready to Go!” The poem is not so much about him as the sense of hope that I felt in connection with his victory. A lot of people were inspired by his example and vision. Looking at this poem tonight, that time seems long ago, more than eight years. He was a fine president in my eyes. He’s the first to say he made some mistakes, but I’d say his eight-year run had plenty of good in it. The country wanted change in November 2008, and he provided fresh leadership. Historians and biographers to come will assess his record and the conditions he faced as the chief executive of the nation. I’m concerned about what will happen in Washington, D.C., starting tomorrow. There’s something “rogue” about the new crew taking over. I’ll never forget the one million or two million, however many in the vast crowd, people at the inauguration in 2009. Just a stunning scene. We had about 20 friends over to our house to watch on TV and celebrate—and kept our son out of school so he could see history unfolding.—PM

The hooded young look like monks on the overpass.

I’m driving to the Park Center to see a film about forgotten artists.

My neighbor George stops near me at a signal light.

Back home, he wrote a “Motoring Column” for The Nigerian Express

Until he exposed a bidding-scandal tied to government cars.

After I walked in and began to load clothes into a dryer.

The Laundry sign is ahead when I blend into downtown traffic.

Today’s newspaper gave us a lot on President-elect Obama.

It took a storm of will to change the political drift.

The kid-monks stream to the Common for a street-peace rally,

Hopping over doves stenciled on a sidewalk near the Owl Diner.

One Response to ‘Ready to Go’