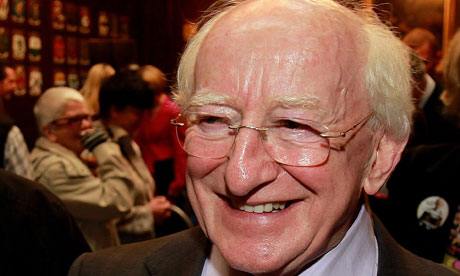 The Associated Press (AP) and the  Guardian are reporting from Dublin that after the votes were counted – veteran left-wing politician Michael D. Higgins has won Ireland’s presidential election with more than 1 million votes and a nearly 57 percent share of support.  The results capped a two-day count of ballots to determine who would succeed Mary McAleese – Ireland’s nationally and internationally popular president who has served since 1997. Higgins – aged 70 born in County Limerick – is a former university lecturer and published poet who has dedicated his four-decade political career to championing Irish culture and left-wing human rights causes worldwide. Rivals bested by Higgings included former IRA commander Martin McGuinness – who was hosted in Lowell a few years ago by then Congressman Marty Meehan – and Sean Gallagher. From all accounts its was a lively campaign.

Read more here at the the guardianuk.com. and for more about Michael D. Higgins here at the bbc.com and here is the full AP story.

One Response to Poet and Activist Ireland’s New President