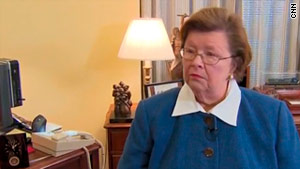 Poised to become the longest serving woman in Senate history, Barbara Mulkoski elected in 1986 has served for 24 in the U. S. Senate representing the state of Maryland. She invited CNN for to her Senate office for an interview to reflect on her tenure — especially her efforts to empower other women.

When she arrived in 1986, Mikulski was one of only two women in the Senate. She was the first Democratic woman elected to the Senate in her own right.

“Other women had served in the Senate, but they had succeeded the unexpired term. They usually had a husband who passed away,” she recalls.

When she is sworn in for a fifth term in January, Mikulski will become the longest serving woman in Senate history, breaking the 24-year record held by the late GOP Sen. Margaret Chase Smith of Maine.